The Vermont Senator is poised to arrive at the Democratic convention as the stronger candidate to take on Trump.

Senator Bernie Sanders would defeat Donald Trump relatively easily in a general election, according to the latest polls. An average of the three most recent major polls predicts a victory of more than 14 points, which would be a landslide in modern presidential politics.

As the country adjusts to the notion that a xenophobic, racist billionaire will be the Republican candidate for the presidency in November, no doubt many hope the strongest candidate emerges from the Democratic Party to defeat him.

The polls are clear on who that candidate is.

And at this point, it isn't just the polls. Political analysis of the two Democratic campaigns also indicates Bernie Sanders is the stronger candidate.

Analysis Beyond the Polls

Independent Voters. Most important of all, Bernie Sanders polls extraordinarily well among independent voters and new voters. In fact, he's the only candidate this year who polls consistently stronger among independents than Donald Trump, which explains his advantage in poll after poll. The Clinton campaign often complains that it "struggles" in open primaries -- such as Indiana -- where independents get to vote. Well, the general election is one big open primary. Everyone gets to vote. Independents will decide this election, and according to the polls and according to actual votes already cast, they prefer Bernie Sanders first, Donald Trump second, and Hillary Clinton last. Some might say November is a long way off, but historically April and May polls have proven accurate about presidential elections. We've already seen in the primaries and caucuses how well Bernie does when independents are allowed to vote. 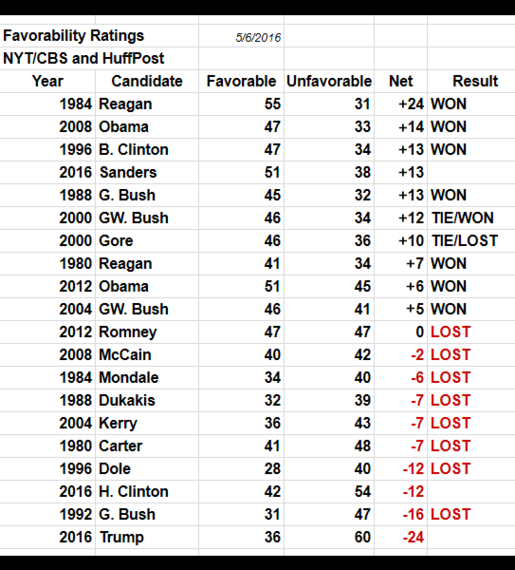 Presidential candidates of the last 35 years and their approval ratings.

Money. Over the last three months, the Sanders campaign has raised more money than either of the other two candidates. The Sanders campaign doesn't accept money from Super PACs -- which makes his haul even more impressive. He has attracted an unprecedented number of contributions from small individual donors: over six million contributions, averaging just $27 each. News reports in the corporate media suggested last week that contributions to Sanders have been down because he raised just $26 million in April after over $40 million in March; these reports blithely discount the facts that $26 million is still an astonishing haul for a single month and that this $26 million puts his campaign over $200 million raised in under a year, without corporate contributions, which is not just remarkable but was considered utterly impossible until... 2016. Bernie asks the thousands of people at his rallies to contribute -- or he sends out an email to the millions of Americans who love his political ideas -- and they donate online within minutes or hours. Hillary Clinton, on the other hand, often jets back to New York or Los Angeles after campaigning in a primary state because she raises her money via private dinners for wealthy contributors in the largest coastal cities. Her campaign has also recently been targeting wealthy Bush family donors, which seems to indicate either that her sources of money are drying up or that beneath the rhetoric she really is politically conservative.

It's important to note that the Sanders campaign also has been raising money for down-ticket progressives, while the Clinton campaign has come under fire for funneling over 90 percent of money ear-marked for state parties to her own campaign. This matters to party leaders across the country.

Enthusiasm. Thousands have been packing Sanders rallies on short notice, coast to coast, for six full months now. Even in supposedly apathetic states such as Indiana, last week, and West Virginia, today, thousands are turning out. People supporting Sanders are unusually excited about his politics and his candidacy. Hillary Clinton's rallies in contrast often attract a few hundred people and, at times, an equal number of protestors.

In addition, according to Personal Democracy Media, which studies the intersection of politics and technology, roughly nine million people have organized online to support the Sanders movement. Hundreds of Facebook pages, Reddit forums, and Slack channels help supporters communicate every day, and they do it for free. The Clinton campaign, by comparison, has far less support online and has gone so far as to pay over $1 million to bloggers and others online to bolster her campaign. Free organic enthusiasm of the kind we're seeing in the Sanders campaign will translate into feet on the ground in crucial swing states on election day.

Scandals & the FBI. A huge amount has already been written about Hillary Clinton's various bad decisions throughout her career, including the ongoing FBI investigation into her illicit use of a private email server. She might be indicted during the campaign, and this further weakens her as a candidate in a potentially ugly campaign against Trump. Nominating someone under FBI investigation just feels risky. Bernie Sanders, meanwhile, has a remarkably clean record for someone who has been in elective office for over 30 years, perhaps the cleanest of any presidential candidate in 100 years.

Get Ready for a Contested Convention

Supporters of Donald Trump probably hope that Hillary Clinton's current lead of 279 delegates carries her to the nomination. They've openly declared she's the candidate they would prefer to face. But with 1,698 pledged delegates to Bernie's 1,419 at this point, Clinton is not likely to win enough delegates in the remaining primaries to reach the 2,383 needed to clinch the nomination before the Democratic National Convention in July. Many of the remaining states favor Bernie Sanders in the polls. But Sanders too is unlikely to reach the needed number of delegates. This means a contested convention to determine the nominee.

If Clinton goes into the convention with a substantial lead, given her close connections with the power brokers of the Democratic Party, many think she would receive the nomination.

Unpledged convention delegates and ordinary Democratic voters, however, will have to consider the reasons listed above before sending their weaker candidate to the general election, particularly if Bernie Sanders wins more pledged delegates during the next six weeks.

Thus the convention in Philadelphia promises to be a contentious affair with thousands or possibly millions of people in the streets. Fireworks of both the political and the pyrotechnic variety will be flying, and party leaders will likely disagree with each other as they struggle to align with the will of ordinary voters.

Considering the critical issues facing our country and planet  --  climate change, living wages, wars, corruption, voter suppression, racial justice  --  Democrats of all stripes and sensibilities should demand this July that the party choose its strongest candidate to run for the presidency.