The two candidates for their party nominations who are drawing the biggest crowds, drawing fervent enthusiasm from their supporters, and seem to be driving the political conversation are running against the establishment. Bernie Sanders and Donald Trump are both basically independents seeking a nod from the incumbent parties. Add to that speculation about a possible Michael Bloomberg independent candidacy, and there's a lot to be said about the state of independents and the status quo of the two-party system.

I have been an independent for years. While working for Democrats and Republicans, I split my ticket depending on the year and who was running. Some might consider my political history a sordid journey; I think it reflects where most Americans have gone with our two stagnant political parties. Among other jobs, I interned on the congressional staff of Rep. Richard Gephardt (D., Mo.); served on the staffs of Rep. Jake Pickle (D., Tex.) and U.S. Sen. Lloyd Bentsen (D., Tex.); and worked on both of Bob Bullock's campaigns for lieutenant governor of Texas as well as both presidential campaigns of George W. Bush and the re-election campaign of Arnold Schwarzenegger (R., Calif.).

A majority of Americans are frustrated at our current political system and the duopoly of our parties, and the fastest-growing segment of voters is people registering as independents. Yet many commentators still argue that all voters predominantly choose between the two parties and that there is no room for independent candidates. The much-discussed anger among voters-of all stripes-stems in part from feeling made to choose between two unsatisfactory options, with no real alternatives. For years, with each election, voters seem to throw one party out to try the other and see if it works differently. So far, nothing has really changed.

This brings us to the 2016 cycle. Sen. Bernie Sanders, an independent from Vermont, is rising in the polls and wins look possible in the Iowa caucuses and the New Hampshire primary against Hillary Clinton. Yes, Mr. Sanders caucuses with Democrats in the U.S. Senate, but he prides himself on being an independent and taking on the system.

Over his adult life, businessman Donald Trump has switched parties five times. He has been a Republican, a Democrat, and an independent. He is leading the race for the GOP nomination and says that he is a Republican, but for all intents and purposes he is an independent taking on the system his own way.

In short, two independents are not just doing extremely well. They are major players creating havoc for the establishment in the nomination process. This shows the broken nature of the two political parties and the depth of the desire for change from the status quo. It is an incredible development that Mr. Sanders and Mr. Trump, men who have very little party allegiance, are creating the most energy in their respective campaigns for party leader. 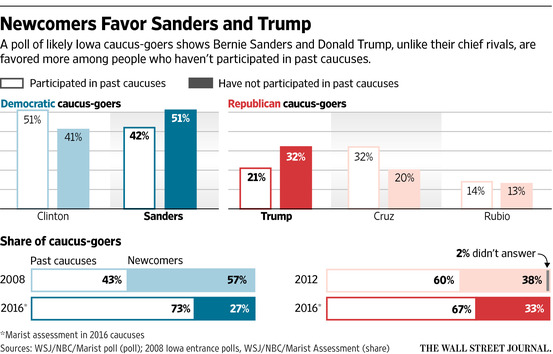 Now, back to a Bloomberg run as an independent. Depending on who wins either of the major-party nominations, the former New York mayor has a very small window for success. That's not because of the lack of desire for an independent-as we can see from the success of Mr. Trump and Mr. Sanders the past six months-but because the electoral college forces a false bifurcated choice. When one looks at possible results state by state, it seems difficult for Mr. Bloomberg to win 270 electoral votes. It is possible, but not probable. The more likely scenario is that if he runs he would either give one party an advantage over the other or he would get enough electoral votes to throw the presidential election into the House of Representatives to be decided. Talk about a recipe for more chaos!

Regardless of whether Michael Bloomberg runs or runs and doesn't succeed, some things are clear: The power of independents across the United States, outside the electoral college, cannot be underestimated. And Mr. Sanders and Mr. Trump have put an exclamation point on the weakness of the two incumbent parties. The evolution of the 2016 election has shown that the two major parties are going to have to deal with the disruption independents are forcing on the system. This cycle is likely to be an accelerator for the success of independents locally and at the state level-developments that can only be good for our democracy.

Matthew J. Dowd is an independent; chief political analyst for ABC News; and founder of Paradox Capital, a social-impact venture fund. He was chief strategist of President George W. Bush's 2004 campaign. He is on Twitter: @MatthewJDowd.