In the arc of Sarah Palin's meteoric rise to fame following her acceptance speech at the 2008 Republican National Convention and her equally meteoric crash a short time later during her infamous interviews with Katie Couric and Charles Gibson -- a crash that has repeated itself over and over again in the six long years since -- there's been a troubling and ultimately duplicitous narrative sprung up by some commentators out of Alaska, where Palin was briefly a popular governor, and it goes something like this: that Sarah Palin was a beloved figure and a committed political crusader before her Cinderella appearance on the national stage, plucked out of obscurity, such as it was, by John McCain's bumbling and beleaguered presidential campaign.

It's a fanciful fairytale. Alaskans are a bit like a dysfunctional family: it's fine for them to call Aunt Sally a so-and-so or Uncle Johnny a this-and-that, but when Outsiders -- and that's what they call the rest of us in the Lower 48, Outsiders -- do the same, well, then, watch out, it's circle-the-wagon time.

There have been many Alaskans who run counter to this tendency -- they know who they are, and I continue to salute them -- but this peculiar zeitgeist has been manifest in a couple of ultimately problematic books about Palin that have emanated from the Last Frontier, and it's a tendency that has often found its way into the reporting of the website Alaska Dispatch (which, it should be noted, has now purchased the state's newspaper of record, the Anchorage Daily News). 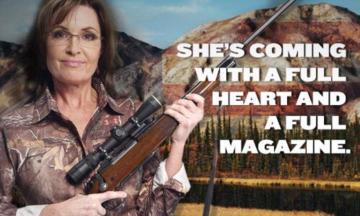 And so we find on both the websites of the News and the Dispatch this past weekend still more of this disturbing tendency, in which one Maia Nolan-Partnow is trying to peddle the Palin snake oil once again.

For the past few months, Nolan-Partnow has found it her calling to review Palin's latest reality television schlock, Amazing America. (How any serious reporter could stomach this assignment is beyond me.) That said, following Episode 2, Nolan-Partnow issued a screed complaining that the show had "too little Sarah Palin," and that she was hoping for "more" of the former-half-term-quitter governor, who by just about any objective account is the most polarizing figure in recent American history. So be it. It takes all kinds, and, apparently, there's no accounting for taste.

But in her summary of the season finale, in which she asserts that we have met "a kinder, gentler Sarah Palin," Nolan-Partnow drops this absolute idiocy:

If Sarah Palin had never run for vice president of the United States, if she had instead finished her term as governor (or served a second term for good measure) and then gone into TV and talked about huntin' and fishin' and Alaska and tips for cooking up the perfect moose chili and maintaining volume on bad hair days, she wouldn't be Sarah Palin, Divisive Politician Who Also Does TV. She would be Sarah Palin, Engaging TV Personality, beloved by all.

It's a great myth -- a huge lie, really -- embraced by some in the Last Frontier and Outside as well -- that if Palin hadn't been corrupted by those damn outside forces, she'd still be one of us, good ol' Sarah from Wasilla.

It's unadulterated bullshit from beginning to end. What people conveniently forget is that Palin was under serious siege as governor before McCain plucked her from oblivion. She had just fired the beloved Commissioner of Public Safety, Walt Monegan, in what was clearly an act of political vengeance. She had already fired many from the inner circle that had first helped to get her elected governor -- John Bitney, Christopher Clark, Paul Fuhs, and Mike Tibbles.

It didn't begin in Juneau. As Mayor of Wasilla, Palin betrayed the likes of police chief Irl Stambaugh, her campaign manager Laura Chase, and her onetime political ally John Stein. She stuck the stiletto in the backs of several Alaska icons, including Wally Hickel, Ted Stevens, and Frank and Lisa Murkowski. Sooner or later, Palin burned everyone with whom she came in contact, including her onetime hatchet man Frank Bailey. Palin's political road-kill extended all the way from Juneau to the Matanuska Valley and back thru Anchorage again.

The one common denominator that links the old Sarah Palin with the new isn't her political ideology (she has none), it's her blatant opportunism. Sarah Palin has always been about Sarah Palin. If it enhanced her hand to work with Democrats on oil-reform and sound like a socialist, then she was willing to cross the aisle. It wasn't from a truly noble impulse to curtail the stain of oil money in Alaska; it was about building her ratings in a state absolutely riddled with political scandals. As I chronicle in my book, The Lies of Sarah Palin: The Untold Story Behind Her Relentless Quest for Power, Palin had the national stage on her mind for a long, long time. The governorship was simply a stepping stone. She was angling for the national spotlight all along.

Would she really be beloved by all? Whom is Nolan-Partnow trying to fool? Palin has left mayhem and destruction everywhere she's tromped throughout her life.

But Palin's latest apologist doesn't stop there. "Politics Sarah Palin," writes Nolan-Partnow, using the noun as an adjective, "is a bit like Rachel Maddow in her red-meat appeal to her base, but Reality TV Sarah Palin has more in common with Rachael Ray."

Rachel Ray? Ask Palin's former brother-in-law Mike Wooten how much like Rachel Ray she was.

And is Nolan-Partnow actually comparing Palin to Maddow, a Rhodes Scholar and a brilliant political analyst, to the woman who muddled her way through five colleges and who still can't string two sentences together?

I'm sorry, but Nolan-Partnow and other like-minded Alaskans who buy into her line of argument still have their heads stuck in the snow. Sarah Palin is never going to be the Rachel Ray of the Last Frontier, no matter how many times she clicks her heels together. She's detested both Inside and Outside, a mean-spirited, self-absorbed grifter out to make a cheap buck wherever she can. And here's the saddest part of the story: She doesn't give a damn about Alaska and never did.

The proof is in the pudding. Palin had every opportunity to run for Senate this season against a Democrat in a bright-red state, and she chose not to. The deadline for filing for the Senate seat is today; I'll bet Nolan-Partnow a case of caribou sausage that Palin doesn't file. Not only does she not have the spine, but she also lacks the courage of her convictions.

If anyone ever wanted to understand what truly motivates Sarah Palin, what moved her and inspired her ambitions, all one has to do is go to the clip file of the old Anchorage Daily News and find a fascinating account from April of 1996:

Sarah Palin, a commercial fisherman from Wasilla [the paper failed to note that she was a seated member of the city council], told her husband on Tuesday she was driving to Anchorage to shop at Costco. Instead, she headed straight for Ivana. And there, at J.C. Penney's cosmetic department, was Ivana, the former Mrs. Donald Trump, sitting at a table next to a photograph of herself. She wore a light-colored pantsuit and pink fingernail polish. Her blonde hair was coiffed in a bouffant French twist. 'We want to see Ivana,' said Palin, who admittedly smells like salmon for a large part of the summer, 'because we are so desperate in Alaska for any semblance of glamour and culture.'

Sarah Palin has become the cheap, vacuous celebrity she so admired when she was a council member in Wasilla. She's become a caricature of her caricature. Unfortunately, her poison still spills across the nation's political landscape. Notice that Nolan-Partnow doesn't mention Palin's continued verbal assaults on both of the Obamas, her polarizing forays into Senate and Congressional races, and her recent disgusting remarks before the NRA declaring that "if I were in charge, [her enemies] would know that waterboarding is how we baptize terrorists."

Of course, Nolan-Partnow mentions none of that, nor the infamous Palin crosshairs on the Arizona congressional district of Gabrielle Giffords. Of course not. That's because our real collective lives are not to be found on reality TV or in the musings of social commentators who view Palin through that distorted lens.

In the last six years, the real Sarah Palin has been revealed multiple times to the American people. She's not fooling anyone. No amount of reality television footage or duplicitous commentary can obscure that.