But who wouldn't want to insure Elle? This 5-year-old therapy dog sits with children in a North Carolina library to help them get more comfortable with reading. She was named the 2013 American Hero Dog by the American Humane Association -- and got to hang out with Betty White at the awards ceremony in Los Angeles. 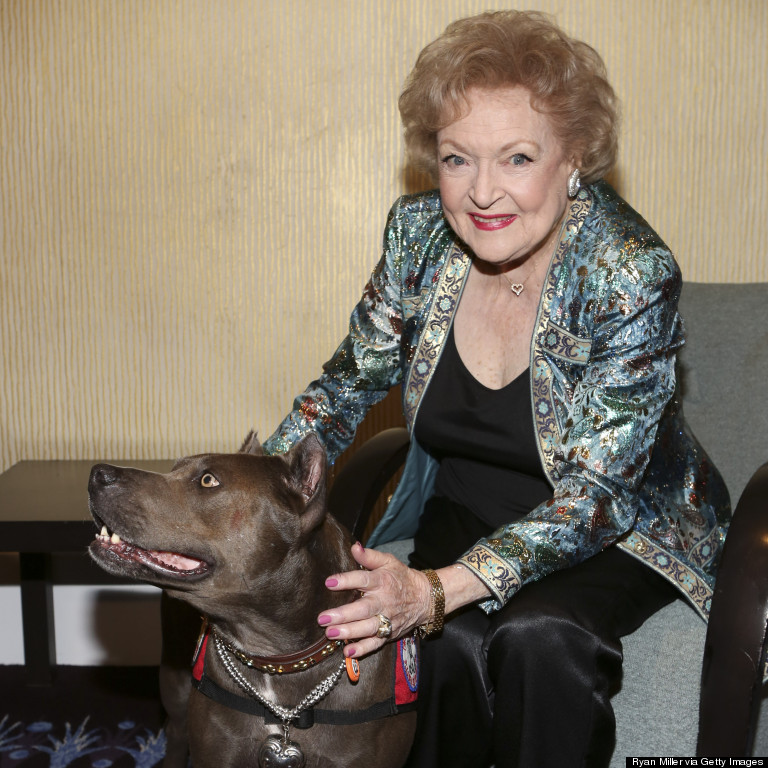 "She has never bitten anybody," Elle's owner, Leah Brewer, told The Huffington Post. "She has been a victim," attacked once by a German shepherd mix and another time by a Jack Russell terrier, and "both times she didn't retaliate."

Brewer's homeowner's insurance company -- she declined to give its name, citing concerns relating to living "in a small town" -- classifies Elle as a "dangerous dog," due to nothing other than her appearance. Or they would, if anyone brought Elle's appearance to the company's attention.

Despite Elle's very public profile -- she's been on on the "Today" show, hobnobbing with celebrities and being celebrated as a model dog in the pit bull advocacy community, and her Facebook page, "Elle the Pit Bull," has almost 200,000 likes -- Brewer says that until now, she's made it a point not to mention Elle's breed to her insurer, worried that her coverage would be dropped.

It's the reason that Spencer Lund, an insurance agent with Farmers, uses photos like this to make sure potential customers know he'll work with pit bull owners:

"I know the struggles that bully breed owners go through," said Lund. "I am a pit bull owner myself."

Those struggles can be agonizing. Some jurisdictions have laws called "breed-specific legislation" that forbid people from keeping certain dogs, like pit bulls, Akitas, chows and wolf-hybrids. BSL has been decried by everyone from the American Kennel Club to President Barack Obama, and states around the country have enacted or are considering legislation that stops localities from discriminating against certain breeds. But even when the dogs aren't banned outright, landlords often have anti-pit bull policies in place, leaving families to choose between housing and their beloved pet.

"I can't find a place unless I give up my dog, and everyone tells me to, but I can't do that," said one pit bull owner, Carol Devia of California, who recently told ABC News that she, her husband and their two sons chose to live in their car when they couldn't find an apartment that would accept their dog Rocco.

Donna Reynolds, the director of pit bull advocacy group BAD RAP, said that the Devias' situation isn't unusual. "What we're finding is our inbox is filled with people who say 'I'm about to go homeless, can you take my dog?'" she said.

The average dog bite claim, Hartwig explained, "is about 25 times what the average person pays for their annual premium." According to the III's most recent figures, insurers paid out almost $500 million for dog bite claims in 2012. The overall number of claims has gone down, but the average cost per claim has gone up by more than $10,000 in the last decade.

III doesn't itself examine breed statistics, but Hartwig said that insurers view dog breed as they would any other risk factor, "the same way we would as the slope of your roof or the distance to the coast. The risk factor is an underwriting factor. And a number of insurers, in the data they have seen, have seen enough of these claims that it has caused them to, in some cases, reduce or not be willing to insure individuals with dogs of a certain breed."

Insurers ask dog owners to identify their pet's breed, Hartwig explained. "The presumption is that the owner knows what breed of dog it is," though a dog bite victim may also be asked to identify a dog's breed.

"Insurers are not doing, to my knowledge, genetic testing to ascertain the pedigree of a dog," he said.

"We do rely on self-reporting," said Janet Masters, a spokeswoman for American Family Insurance, a company that got attention recently for dropping a longtime customer who owns a pit bull.

Masters said to HuffPost that the company's decision not to insure homes with pit bulls or certain other breeds is hardly unique among insurers, and "is based solely on claims experience and statistical information from objective sources, such as the CDC and III."

Except that, again, III doesn't examine data about dog breeds. And as for the Centers for Disease Control and Prevention, its widely cited 2000 report on dog bites -- which did find certain breeds, especially "pit bull-type dogs" and rottweilers, to be involved in more attacks than others -- is straightforward about its own limitations. The report's authors themselves say their findings should not be used to support breed-specific legislation, but recommend that "an alternative ... is to regulate individual dogs and owners on the basis of their behavior."

The most recent comprehensive examination of dog bite data was published in the Journal of the American Veterinary Medical Association this past December. The researchers, who included the lead author of the CDC's 2000 study, compiled much more extensive case histories than the CDC had previously. And this time, the researchers concluded that breed was not a significant contributing factor in fatal dog bites. What were found to be the salient factors? Things like the owner failing to neuter or spay their dog, the owner's abuse or neglect of the dog and the failure of someone to intervene once an attack got started.

In more than 80 percent of the 256 dog bite fatalities the JAVMA researchers examined, breed could not even be reliably determined.

These figures are in line with a National Institute for Health study from 2009, looking at dogs identified at pit bulls in Florida animal shelters. That study also found that most people are fairly bad at identifying what breed of dog they're interacting with. (Here's an online test that lets you try to pick out which pit-appearing dog is an actual pit bull.)

Given all this, some insurers, like State Farm, aren't basing their underwriting decisions on breed. In fact, the company doesn't even ask about a dog's lineage. Instead, when someone applies for homeowner's insurance, State Farm asks if the dog has ever bitten anyone.

Brewer told HuffPost she's in the process of switching over to State Farm (and signing Elle on as a State Farm spokesdog). She's making the switch in part because she wants to feel assured that her insurer won't suddenly drop coverage upon discovering Elle's provenance, and in part to send a message that "an insurance company that practices fair treatment to customers speaks volumes," she said. "It means a lot that they are treating my dog like a part of the family, recognizing that dogs are individuals and understanding that I am a responsible pet parent." 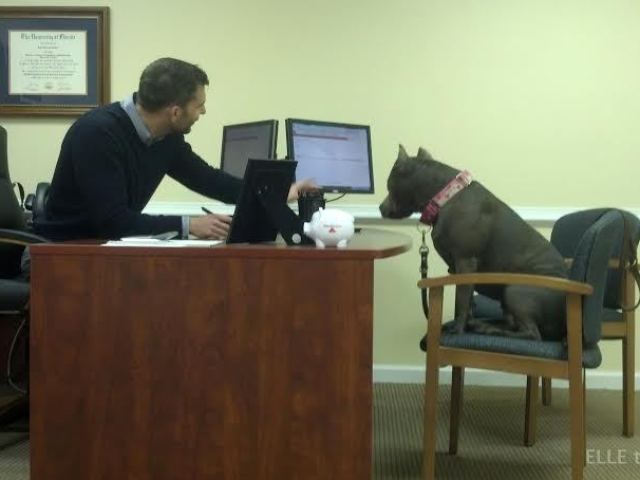 There is reason to hope more insurers will follow suit: Hartwig says that homeowner's insurance is indeed a "competitive market," and -- with dogs in nearly half of American households, and 20 percent of those adopted from shelters, according to the American Humane Society -- he expects consumer pressure will influence other companies' underwriting decisions with regard to dogs.

Even American Family appears open to change. Masters, asked how her company would incorporate the JAVMA study into its underwriting decisions, said she wasn't aware it had been reviewed yet. But, she said, "what I can tell you is we are always reviewing new information as well as claims data, and evaluating our policies to make sure we're serving and benefiting all our customers."

As for Elle, Brewer isn't even 100 percent certain that her dog is actually a pit bull.

The image at the top of this story has been changed from one of a bull terrier at a computer to a pit bull type dog kissing a person.

Do you love your pit bull? Please email us with your dog's photo and name at pitbullpics@huffingtonpost.com and complete the sentence "My pit bull ..." and we may feature your pooch on the site.